“We are a new generation and we all use computers for basically everything,” said Brandon Ye, a 16-year-old junior at California High in San Ramon, after learning the Snap visual, drag-and-drop programming language. “This could give us a new understanding. Like, when you post something on Facebook, why does it show up like that? It feels empowering.”

The university started in 2010 hosting daylong activities to introduce high school students to programming, said computer science instructor Dan Garcia, who helped found the university program. He got students thinking about how to win and lose at Tic Tac Toe during a presentation about crafting games.

Jennifer Parra, 14, a geometry student from Downtown College Prep Charter High in San Jose, said she especially enjoyed learning the Tic Tac Toe strategies.  “It gives us brain knowledge,” she said. “Computers are a big part of our daily lives. This is actually pretty fun.”

Aside from the fun programming activities, her classmate Tiffany Nguyen, 14, said she enjoyed the chance to visit a university.  “I thought it was a really cool experience because you get to go to college,” Nguyen said.

The programming day at UC Berkeley is part of the larger international Computer Science Education Week, all of which is a push to get youngsters interested in computer science careers. For example, in many K-12 schools this week students will participate in an hourlong interactive tutorial on computer programming called the Hour of Code. 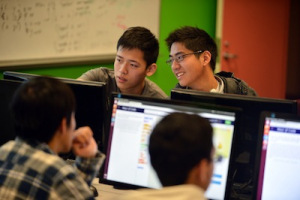 Garcia said outreach to high schools is helping to interest teens in computer programming before they get to college. For the first time ever last year, more than half of the students in UC Berkeley’s introductory computer science course were women, he said proudly.

Yet, many high schools don’t offer computer science and those that do often see more boys than girls taking the classes. Andrew Doolittle, who teaches computer science at Arroyo High in San Lorenzo, said he has drummed up interest in his classes by asking his students to explain what they are learning to their classmates in advanced math classes just before it’s time to register for next year’s courses.

As a result, Doolittle said interest in computer science at Arroyo has doubled, with his program growing from one advanced placement course and one introductory course last year to two sections of each this year.

More than half of the freshmen at UC Berkeley take an intro to computer science class, even though they won’t all major in it, said David Culler, chairman of the Electronic Engineering and Computer Science Department.

“The demand for computer science courses has tripled in the last three to four years,” he said. “About 70 percent of job growth in the next 10 years will be in computer-related fields. But all the other jobs will also have elements of it.”

Garcia’s introductory course is a prototype for a new advanced placement computer science course promoted by the National Science Foundation through its CS 10K campaign, which aims to get the curriculum into 10,000 high schools, Culler said.

Josiah Harper, a 16-year-old junior at Arroyo, said he became interested in computer programming because he wanted to find out how video games work.  “It’s definitely something I enjoy,” he said. “It’s just fun to create things I had in my mind and see it come out on the computer. It’s cool.”

CSforCA is a campaign to ensure every student in California has the opportunity to learn computer science.

This research report exposes one of the foundational causes of underrepresentation in computing: disparities in access to computer science courses in California’s public high schools. This report provides new, detailed data on these disparities by student body demographics such as race, socioeconomic status, and primary language. The report also highlights dismal computer science enrollment in California’s 20 largest school districts and offers recommendations to close these gaps in opportunity. Read more...

ALLIANCE FOR CALIFORNIA COMPUTING EDUCATION FOR STUDENTS AND SCHOOLS